Certified renewable energy in all of the Group’s plants

One of the values in which Riri believes is that sustainability can be considered concrete only when it derives from specific attention to the intake of natural resources, not just by working directly but also making sure that the whole industry does the same.

For the Swiss group, the starting point has been the use of electricity, primarily for heating, air conditioning and lighting of its plants: in three years, from 2017 to 2020, the use of renewable energy has increased from 47% to 99%. The Group’s next objective is to achieve the same results also in its Poggio a Caiano plant.

Apart from the use of renewable electricity, Riri has been implementing a number of actions to reduce its carbon footprint; more specifically:
- gradual replacing of traditional lighting systems with LED lamps;
– using photovoltaic panels, already installed in the Palazzolo plant, also in other plants owned by the Group;
– power intake measurement through continuous monitoring systems;
- energy audits according to the UNI CEI EN ISO 50001 standard;
– wherever possible, shift from diesel heating to natural gas systems.

All these environment-friendly choices have led the Group to reducing its CO2 eq emissions by about 5%.

Download the infographics and find out more about Riri’s commitment to using renewable energy: 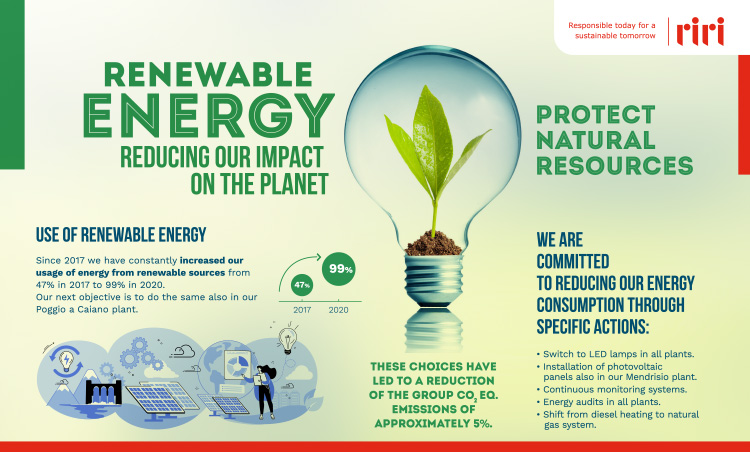